..what started out as an IVF journey and ended up being about life

…just when i thought things were going so smoothly, someone had to break into my truck and steal my cellphone, gymbag and work bag. I love society!! Such a wonderful thing. And the best part was explaining to my almost 3 year old how there are bad people in this world and they went into Mommy’s car and took all her stuff. So now we have to go to the police station and tell them. Poor little guy thinks the police man is just going to give me my stuff back – HaHaHa.

Yes, I know worse things could happen – it was just frustrating.annoying.sad.aggravating.etc.etc. It could have been much, much worse but I just get so tired of having stupid shit happen to me. I try to be the good guy all the time and this is the thanks I always end up getting…

Waiting for new cellphone now. Worrying about the fact that all my personal info is out “there” somewhere yet again. Wondering if they will “visit” our home now. All the good things I get to look forward to now.

Go.Fuck.Yourselves.BadGuys!!!! I hate you all – Would love to see Armageddon or some other lovely thing happen to you great and small…..We, the normal folks, use honest means to get through each day and it really sucks that you have to ruin our days with your selfish crap.

Thank you and Goodnite……

Funny how much things change after 3 years.

3 years of somewhat maintaining this blog.

My child is almost 3 years old.

I have a child that was buried over 3 years ago.

3 years ago, I wasn’t sure if I would ever be a mother but I never thought about not having my own mother around.

And it’s been 2 years of not having a Mom on Mothers Day.

Which I think is the biggest hurt of all now.

All the things I miss about her. All the times I want to call her – for advice, for laughs, to cry, to vent or just to talk.for hours.and hours.and hours. I think about all the times Dan and I used to fight because I would come home so late from her house. What if I hadn’t spent all that time with her then? Would I regret it like I regret not seeing her in the hospital those few months between Colin’s birth and her death?

I miss her so much and although it’s not as much a forefront of my everyday life, it’s so very painful on a day like Mothers Day – and this Saturday will be her birthday. I miss the whole clan gathering at her house for the day, each of us laden with flats and flats of plants. She loved to garden, she loved her flowers so much and we all loved her so much that it boggles my mind sometimes. She was truly the center of our lives as a family. And so much has fallen by the wayside since her death. None of my siblings are the same. We are all damaged and we have all lost something of ourselves. She was truly the glue that held us together and made us whole. What was lost with her death will probably never be repaired.

I urge anyone who is an adult and still has their mother around to give her an extra hug, not on Mothers Day but every day. Tell her how much you love her. Be there for her if she needs you. Because the day will come when she is not there. No matter how much she may get on your nerves at times, she still loves you and has dedicated her life to you. The least you can give her is your time now. Hopefully, you will have her around for good long while. I was fairly lucky – I had my Mom till I was 45, my youngest sisters not so much.

I treasure all those moments I did have with her and regret all the things that were missed.

I love you Mom – I always will – you made me what I am today and I only hope to be half the “Mump” you were. 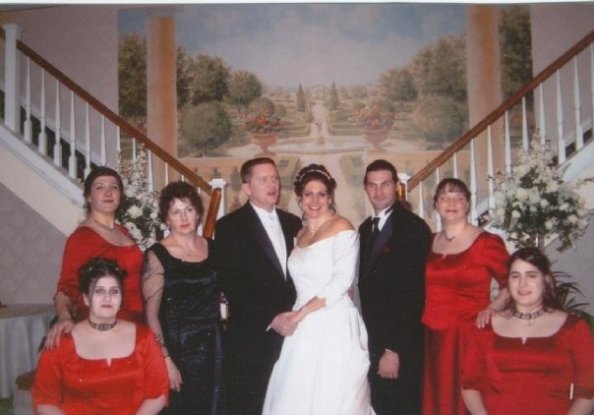 Maurice Sendak passed today. Not that he didn’t live a full life (he was 83), but it saddens me terribly. I’m not 100% sure why – the strangest things make me cry these days. But reading that he died brought tears to my eyes.

He was the author of my most favorite book as a child “Where the Wild Things Are”. I can’t tell anyone how much I adored that story. I read it over and over…dogeared my original copy to the point where my mother had to chuck it.

Years later, I purchased another copy of the book and when McFarlane toys came out with the figurines, I had to buy not one but two of each character. Over the years, some of them were broken and I was glad to have the backups. When we decorated Colin’s room, I put up a shelf with a hard-cover copy of the book and all the figurines. It’s still up there now. I also purchased a soft-cover version of the story and read that to C some nights in the hopes that he catches the Wild Thing fever.

Mr. Sendak also wrote “Chicken Soup with Rice” AND was the illustrator for “Little Bear”. The Nickelodeon show is one of Colin’s favorites.

Good-bye Mr. Sendak – may you romp with the Wild Things into eternity.

Okay, so I figured I had to give this a shot. Not only should it save boatloads of money if it works out, but I now have some kind of idea what is going into my laundry detergent.

I had seen a few posts here and there about making it yourself and this “recipe” seemed to be the most popular. It was not nearly as difficult to make as I expected. Like I had read, the worst part was grating the soap. I’ve been using it for a few days now and it seems to work great. Now, if it lasts as long as it should the savings will be significant.

Here’s the recipe for those that may want to give it a shot:

The ingredients as we used them

Total Cost:$26.50 — and this is supposed to last approximately a year.

To make it, you need a large bucket. I mixed it in portions to make life a little easier. Plus, I had Colin helping so it gave him something to do by mixing the powders together and I would add the Zote soap as I grated it. I think it took us an hour total. Once it’s all mixed, you use 1-2 tablespoons per load of laundry. I followed another bloggers suggestion of putting the detergent into the empty Purex bottle and then using the cap to measure out detergent per load. The middle line on the cap is 2 tablespoons so there is no thinking involved 🙂

this is the soap all grated up

Colin mixing up the detergent

After it was all mixed, I put the detergent into some extra large storage bags I had. I ended up with 2 large bags of detergent and the Purex bottle full. I figure that even if I only get six months out of it, I’m still saving around $50 since I was using Method detergent at $12/bottle on sale and I went through a bottle a month…

This is what I ended up with when I was done.

By the way, this works in HE machines also.

Now I have to find a “recipe” for dishwashing liquid!

I just wanted to come back to say – I made this detergent in May and just had to make a new batch a few weeks ago. Started using it the beginning of December. So, $28 for 6 months of detergent works out just fine for me! And it really works great, my clothes smell good and they come out clean every time.

just barely.by the skin of our teeth.with not a penny to spare…..but we did it!! We made it to goal as a team. As of today I have $150 in checks to post to the March for Babies site and we are at our $2500 goal.

Can’t imagine how hard next year is going to be 😛